Za Potto is a strong close-ranged stand that is very similar to The World. It is very powerful within close-ranged and melee combat.

It appears to be a reskin of the World, as it’s main colors are orange and white. It also wears a pot on it’s head, similar to Pot Platinum.

Za Potto has the ability to stop time for up to 15 seconds. It also has immense physical strength and incredible speed. It can also use forks, as an alternative to knives. 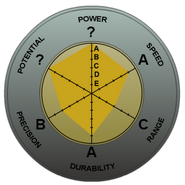