Wild Slasher: Stars of Hopes's main ability is to control matter to a sub-atomic level meaning he can move, erase, change, recompose and create anything out of nowhere.

In a low level threat Wild Slasher: Stars of Hopes can just move the matter of an object like a car or something like that, like if it was some kind of telekinesis but in reality he is moving the object by moving every fragment of matter that makes the object what it is and he can just move it around like nothing.

In a medium level threat Wild Slasher: Stars of Hopes can rip parts of buildings or the entire structure by using a combination of Universal Cosmic Energy which allows him to link his powers to further levels connecting to bigger objects or structures in order to move them faster and easier.

In a high level threat Wild Slasher: Stars of Hopes can use Universal Cosmic Energy to power up his power and move way bigger structures, like in one case scenario he basically carried an entire Baseball stadium in order to trap his enemies and of course this requires more focus for Maximus but it still works. Or he can just create things out of the air changing the material of Oxygen from gas to solid and changing it to anything he wants or delete it if he wants.

Wild Slasher: Stars of Hopes's time ability, kinda bullshit but is possible, after 5 years of learning Maximus learns how to link his UCE energy to one of the main components of the universe, Time, stopping time itself for a few seconds, but over time he can stop time for longer by training his stamina.

Wild Slasher: Stars of Hopes's second ability is interdimensional portals, this both requires WS:SOH's matter power and Universal Cosmic Energy by using the power of matter in order to charge it up with UCE and make a singularity to open a gate to other places in the world or Alternative Universes ,basically how D4C works, and also the same law happens to him, but Maximus can just pull more clones in a single dimension thanks to his UCE and link his power to his other friends.

Maximus' healing also is some what faster thanks to the capacity of his UCE passive ability of keeping the user alive, he can still die but is hard if you take his energy armor in count, also plasma bullets, which will load the enemy's body with UCE energy and deal massive damage similar to Johnny's fingernails but stronger and goes more into stamina than ammo.

Maximus' UCE has a bunch of abilities since aside from the healing one of his original abilities is Evolution allowing him learn a new ability each day or randomly which of course through the years he has been mastering this ability allowing him to use a large variety of abilities and combos like Interdimensional sight where he can see over certain stand abilities or TS's which thanks to his massive charge of energy in Maximus body and eyes he can move in this certain events. 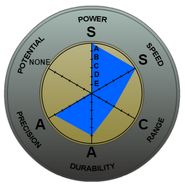