“I was talking to myself just the other day, I was hearin' lots of things I never thought I'd say, but one thing I said really blew my mind.. Who's Who?” - Craig Houston

Who's Who is a stand based around saving one's soul from death.

NOTE: Who's Who is not canon to any stories, and these abilities are not it's full capabilities.

Who's Who takes the form of a robotic humanoid with a "PLASMA MK2" TV for a head. There is no company on record for the creation of the head.

Who's Who wears a light blue suit with black gloves, a neon purple bow, and a black vest.

Who's Who possesses light pink eyes that it can use as a flashlight.

Who's Who turns the user into a ghostly shadow form. Allowing them to interact with objects and people. They have a limited amount of time in this form to go back into their body, otherwise, they'll go into a coma, or worse.

Who's Who gives the user a form of amnesia, or memory loss, if they don't go back into their body in time. After the coma ends, they lose all memories except very basic ones, such as math, and emotional memories. They forget who they are, and must make do with the information given to them by others during this state. If the user looks at themself in a mirror, they cannot see themself. Nothing will appear in the mirror. 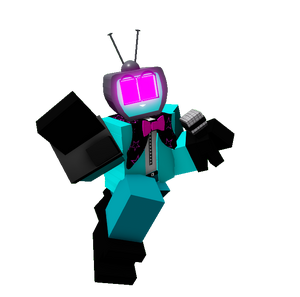