Paint It Black is the Stand of Luna Crusader, the current protagonist of the wiki story "Memedust" (Formerly known as Memedust Crusaders). Luna is a seventeen-year-old girl. She has black hair with naturally purple highlights and square-shaped pupils. In the story, Luna was born with Paint It Black, as is the curse of her bloodline, The Crusaders, to be born with a Stand and to become a burden to the very lives of those whom you grow close to. In the story, Luna sets out to break her family's curse by protecting her brothers from certain death, which they have been prophecied to experience in two years time of the story's beginning.

This Stand and Memedust are not involved in the ABDF wiki "canon" in any way.

Paint It Black is feminine in frame, having a small waist but hips that stick outwards slightly. The Stand's head consists of what appears to be a sort-of helmet from a plastic looking material. On the sides of it's head are objects that stick out then bend downwards. Aside from that, the rest of this Stand's design is rather basic. It's colors mostly consist of White, Grey, and of course, Black.

Paint It Black can, like most humanoid Stands, attack targets with their fists and legs. What Paint It Black loses in brute force, it can make up for in speed and fighting skill, being able to throw punches about as fast as Jackie-Chan could. Complimenting this is the Stand user's fighting knowledge, being able to scrap without their Stand.

Paint it, Black (Bendy and the Ink Machine)

Using it's fist, Paint It Black can create wormholes made of ink that lead into a pocket dimension, the landscape of said dimension is similar to the area the portal is created in but made out of, you guessed it, ink. The skies of said dimension are pure-white and there seems to be no lights, yet despite this there is no dark spots anywhere. This dimension's true potential and abilities are unknown. 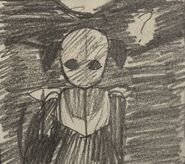 Paint It Black gazing down on an ant. 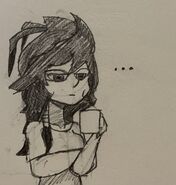