Sandstorm is a stand manifested from their user, Adonisaur. Not much is known about the stand, not even the user knows how he got it.

Sandstorm appears to be a well built man even more well built than its user with long hair, and eyes like Echoes act 3. The skin of the stand very's from Gold, White, and Black. Wavy lines go from the chest down to the waste. Wearing baggy pants along with it.

The stand has the ability to harden anything and/or everything. While having 1-2 meters in close range for the stand itself, the hardening can range between 8-10 meters.

Sandstorm also has the capabilities of super-human speed. 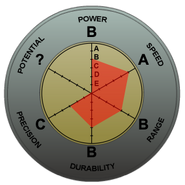