“I might have gotten stronger now, but don't think i will get cooky now just because of that.” - Thegamerjakce2

Fighting spirit, after incrusting a requiem arrow in his body, it has improved his abilities and potential to become stronger, It can think apart from Jakce now, but it still helps him, become he is its user, of course it has learned to "troll" people.

It got a completelly different armor, with "Armclaws" in its arms, more claws in his boots and less armor in his body.

Fighting spirit requiem can now create and manipulate even more types of energy, like chemical, thermical, electromagnetic, nuclear, mechanical energy and of course electricity, an example would be increasing the heat of an object by a lot.

Fighting spirit requiem can manipulate the kinetic, potential and mechanical energy of an object or person, unfortunally, he can't make the kinetic's energy speed 0, due that kinetic energy's formula is "1/2mv^2", so, we would be making the speed 0 m/s, it would multiply by the movement, becoming 0, and since 0 can't be divided, the ecuation wouldn't finish never, so, he can only slow down thing to the point that they don't move at all, but still move, jakce can increase his potential energy by a lot so when he starts running, the potential energy becomes kinetic, allowing him to run at an immense speed. Mechanical its just a mix of kinetic and potential energy, it generates while doing a "job" (like a clock working.)

The rules of this abilities are:

No kinetic energy speed going to zero (only zero, negative speed is allowed)

FSR's armclaws, being one of the most notable changes, are also one of the protagonist of a new ability, they can be used as a weapon or like if they were like bruno's detachable's arms. 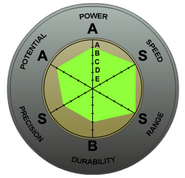