View source
watch 01:36
We're Getting Mutants in the MCU - The Loop
Do you like this video?
Play Sound

"During a fight, you must not show fear, showing fear is going to show the enemy your weak point, be brave and fight with honor!" -Thegamerjakce2

Fighting Spirit is thegamerjakce's stand, which he got from an arrow (thegamerjakce2 never used the arrow on himself, the arrow was shooted at him), the stand itself has some armor that allows him to block some projectiles, also, fighting spirit don't own a face, because his face depends on the face of the user.

His strength allows him to fight, no matter how heavy the armor is, that's why his strength is b, his armor takes a part of his strength.

Electricity control: His main ability is about controlling electricity, and like normal electricity, it can be transferred through electricity conductors, and fighting spirit can use it for more than fighting purposes, one example is charging a phone.

Electricity absorption: this ability allows FS to absorb any form of electricity (except hamon) around a range of 7 meters and use it to benefit his main ability 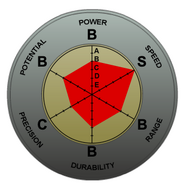