Doncamatic is the second evolution of Rhinestone Eyes, and is much more deadly than it's predecessors due to the versatility granted by it's new ability.

The ability to slow down everything (except the user) within a 10-meter radius of it.

Doncamatic possesses the capability to reverse the functions of it's slowdown fields, speeding up anything that enters them.

Doncamatic is capable of manipulating liquids around it in any way it's user wants. 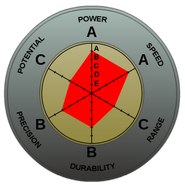