"Tell me, do you follow the path of God? Or the path of the Devil? Answer wisely, or it might be your last question before death." -Cruel Angel (Zankokunatenshi, 残酷な天使)

Cruel Angel is the Stand of an unknown user, who has died before the setting of The Reaper's Masquerade and The Conductor's Train respectively. The user was a believer in both God and Satan, idolising them as the ones who would correct the world during it's darkest hour. But was killed by an unknown assailant who is thought to be part of a cult

Cruel Angel takes the form of a mechanical humanoid resembling an angel, with 6 mechanical wings and arms. 2 of these wings resemble more demonic-looking wings, which are located in the middle of the other 2 angelic - looking wings. Cruel Angel is a mostly feminine looking Stand, with a helmet that conceals its face, save for the mouth. On the front of the helmet is a visor that displays certain emotions, but is mostly always 3 static lines. Each finger is clawed. It's main colour scheme is Purple and Green, with some black at the sectioned waist, and yellow for the front of the neck. There is red on the shoulders and it also has a small horn. Alternatively, it can sometimes be seen with large shoulder pads that extend upwards

Cruel Angel has 2 different sides to it. On one side, it has a seemingly caring and kind personality, but look past that and you see a devilish personality. The type of personality used is indicated by the wings. Depending on where the wings are, and what they appear as, the personality will either be the kind one, the devilish one, or a mix of both. The mix happens when one half is all angelic, and the other is all demonic. It will not attack unless it is forced to, or acknowledges that its foe is a Sinner with a long list of crimes under their name.

Cruel Angel is capable of using these 2 elements for attacks or creating weapons such as its iconic sword, Gatling gun and light strings. However it is not limited to those, as it can conjure almost anything it so desires.

With the wings on its back, Cruel Angel is capable of flying at fast speeds. It can use the laser like feathers/scales scattered on the wings as projectile attacks that can easily cut down a single tree 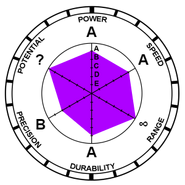 EVA-01 titular face of Evangelion, this is the source of Cruel Angel's colour scheme and certain designs used in Cruel Angel reflect EVA-01

Another variant of the 01 unit from Evangelion (Rebuild), another source of the colour scheme
Community content is available under CC-BY-SA unless otherwise noted.
Advertisement