Butter Fingers is a 4 stage stand that is similar to an Act stand due to it's evolutions, but different in the way it functions. Butter Fingers cannot change between it's stages, does not have a different ability in a stage, and can evolve with time alone. As it evolves it's previous form will be under the new evolution, with the new stage action as a shell for it's previous stages. Should the current stage be damaged enough it will break apart, showing the previous one underneath. As time passes it will grow back into it's current highest stage. Similarly to Act stands, it can evolve with user development, though, as stated previously, it can evolve with time alone. It's user's name is Retracted for reasons private only to me (I like my name).

Butter Fingers 1 is a purple spherical metal ball with two black discorectangles as eyes. It appears to have some form of bevor that looks like a mouth, though not functioning.

Butter Fingers 2 looks similar to Butter Fingers 1, though it has a body and limbs. The limbs are all elongated capsules with a lighter shade of purple that it's head and body, containing a joint in the middle of each limb to move them. It's body is a cylinder.

Butter Fingers 3 is drastically different from it's previous two stages, looking more like a monster than some scrap metal robot. It's head is still spherical but it is split into thirds, having a giant singular eye rest in the center. It's limbs look like to vines spiraling around each other, with the arms having a hand with sharp claws at the end and the legs having a singular sharp foot at the end. It's torso is split into two pieces and has a hole in it revealing it's previous form, Butter Fingers 2. A ring is around this hole that is applied over the torso's two halves. Four balls are located on parts of the torso, connecting the limbs to it.

Butter Fingers 4 also looks different than any of it's previous forms. It takes a more humanoid appearance, though regaining some of it's roboticness. It's head is more humanoid, it's eyes are cases with lines, the top of it's head is dark blue and looks like glass, and it has a sharp protrusion from where it's jaw would be. It's also segmented into two pieces rather than three. It has a neck that leads into it's torso, which is segmented into two main parts. The top half is heart shaped, separated into three pieces (one being uneven). A ring where it's previous form held Butter Fingers 2 is there, though Butter Fingers 2 is not visible. The lower half of the torso sticks out from the sides and are blue in color. From the top of the torso sticks out two pauldrons on opposite sides, having a ball joint sticking out below to connect the arms. The arms are segmented into three parts, the first having a sharp pattern to mimic Butter Fingers 3's limbs, the second being lined and having a circle inside, and the third being the hand, having a triangle in the middle of both sides and having blue knuckles. Below the torso is some sort of pelvic area, having two small circles on opposite sides. Out from this are the legs, segmented into four parts. The first is lined and has a triangle in the center, the second having a pattern mimicking Butter Fingers 3's limbs, the third being a mostly blank area with two lines, and the fourth being a foot with a triangle in the center.

All stages of Butter Fingers have mathematical abilities, though not extreme amounts. This simply allows for more accurate actions to be done during any situation, though using this ability to do regular math problems is also within use.

The final two stages of Butter Fingers have the passive ability to improve DISCO abilities, with the final stage having a greater effect than the third. DISCO abilities can become stronger, less straining, or simply just possible. 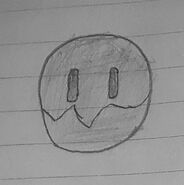